Bigelow was born in San Carlos, California, the only child of Gertrude Kathryn (née Larson; 1917–1994), a librarian, and Ronald Elliot Bigelow (1915–1992), a paint factory manager.[7] Her mother was of Norwegian descent.[8] Bigelow's early creative endeavors were as a student of painting. She enrolled at San Francisco Art Institute in the fall of 1970 and received her Bachelor of Fine Arts in December 1972. While enrolled at SFAI, she was accepted into the Whitney Museum of American Art's Independent Study Program in New York City.[9] Bigelow's early work benefited from her apprenticeships with Vito Acconci, Richard Serra, and Lawrence Weiner.[10] Also in her early days in Manhattan, Bigelow teamed up with Philip Glass on a real-estate venture in which the pair personally renovated distressed apartments downtown then sold them for a profit.[11]

Bigelow entered the graduate film program at Columbia University, where she studied theory and criticism and earned her master's degree. Her professors included Vito Acconci, Sylvère Lotringer and Susan Sontag,[12] as well as Andrew Sarris and Edward W. Said.[13] and she worked with the Art & Language collective and noted conceptualist Lawrence Weiner.[14] She also taught at the California Institute of the Arts.[15] While working with Art and Language, Bigelow began a short film, The Set-Up (1978), which found favor with director Miloš Forman,[11] then teaching at Columbia University, and which Bigelow later submitted as part of her MFA at Columbia.[10]

Bigelow's short "The Set-Up," is a 20-minute deconstruction of violence in film. The film portrays "two men fighting each other as the semioticians Sylvère Lotringer and Marshall Blonsky deconstruct the images in voice-over."[12] Bigelow asked her actors to actually beat and bludgeon each other throughout the film's all-night shoot.[10] Her first full-length feature was The Loveless (1982), a biker film which she co-directed with Monty Montgomery and featured Willem Dafoe in his first starring role. Next, she directed Near Dark (1987), which she co-scripted with Eric Red. In the same year, she directed a music video for the New Order song "Touched by the Hand of God"; the video is a spoof of glam metal imagery.

Bigelow's subsequent trilogy of action films — Blue Steel, Point Break, and Strange Days — merged her philosophically minded manipulation of pace with the market demands of mainstream film-making. In the process, Bigelow became recognizable as both a Hollywood brand and an auteur. All three films rethink the conventions of action cinema while exploring gendered and racial politics.[10]

Bigelow followed Blue Steel with Point Break (1991), which starred Keanu Reeves as an FBI agent who poses as a surfer to catch the "Ex-Presidents", a team of surfing armed robbers led by Patrick Swayze who wear Reagan, Nixon, LBJ and Jimmy Carter masks when they hold up banks. Point Break (1991) was Kathryn Bigelow's most profitable 'studio' film, taking approximately $80 million at the global box-office during the year of its release, and yet it remains one of her least well-received films, both in commercial reviews and academic analysis. This is perhaps due to the fact that it most successfully conforms to its action genre and abandons much of the stylistic substance and subtext of Bigelow's other work.[17]

In 1993, she directed an episode of the TV series Wild Palms.

Bigelow's 1995 film Strange Days was written and produced by her ex-husband James Cameron. Despite some positive reviews, the film was a commercial failure. Furthermore, many attributed the creative vision to James Cameron, diminishing Bigelow's perceived influence on the film.[10]

Based on Anita Shreve's novel of the same name, Bigelow's 2000 film The Weight of Water is a portrait of two women trapped in suffocating relationships.

In 2002 she directed K-19: The Widowmaker, starring Harrison Ford and Liam Neeson, about a group of men aboard the Soviet Union's first nuclear-powered submarine. The film fared poorly at the box office and was received with mixed reactions by critics, gaining an aggregate score of 58 on Metacritic. 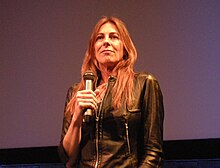 Bigelow next directed The Hurt Locker, which was first shown at the Venice Film Festival in September 2008, was the Closing Night selection for Maryland Film Festival in May 2009, and theatrically released in the US in June 2009. It qualified for the 2010 Oscars as it did not premiere in an Oscar-qualifying run in Los Angeles until mid-2009. Set in post-invasion Iraq, the film received "universal acclaim" (according to Metacritic)[18] and a 97% "fresh" rating from the critics aggregated by Rotten Tomatoes.[19] The film stars Jeremy Renner, Brian Geraghty and Anthony Mackie, with cameos by Guy Pearce, David Morse and Ralph Fiennes. She won the Directors Guild of America award for Outstanding Directorial Achievement in Motion Pictures (becoming the first woman to win the award) and also received a Golden Globe nomination for her direction. In 2010, she won the award for Best Director and The Hurt Locker won Best Picture at the 63rd British Academy Film Awards.,[20] She became the first woman to receive an Academy Award for Best Director for The Hurt Locker[21] She was the fourth woman in history to be nominated for the honor, and only the second American woman.

Bigelow's next film was Zero Dark Thirty, a dramatization of American efforts to find Osama bin Laden. Zero Dark Thirty was acclaimed by film critics[22] but it has also attracted controversy and strong criticism for its allegedly pro-torture stance.[23] Bigelow won the New York Film Critics Circle Award for Best Director for the film, making her the first woman to win the award twice. She had already won previously for directing The Hurt Locker.[24] She also won the National Board of Review Award for Best Director for Zero Dark Thirty, making her the first woman to win that award.[25]

In 2014 Bigelow announced plans to direct two movies: an adaptation of Anand Giridharadas's non-fiction book The True American: Murder and Mercy in Texas starring Tom Hardy[26] and a feature based on the life of Bowe Bergdahl written by her frequent collaborator Mark Boal.[27]

In early 2016 Bigelow announced that she would be collaborating with Mark Boal again on an untitled film set during the 1967 Detroit riots.[28] The film planned to shoot in the summer of 2016 in order to be released in 2017 in time for the 50th anniversary of the riots.

In the early 1980s, Bigelow modeled for a Gap advertisement. Her acting credits include Lizzie Borden's 1983 film Born in Flames as a feminist newspaper editor, and as the leader of a cowgirl gang in the 1988 music video of Martini Ranch's "Reach", which was directed by her ex-husband, James Cameron.

Bigelow was married to fellow director James Cameron from 1989 to 1991. She and Cameron were both nominated for Best Director at the 2010 82nd Academy Awards, which Bigelow won.