Sexual differentiation is the process of development of the differences between males and females from an undifferentiated zygote. As male and female individuals develop from zygotes into fetuses, into infants, children, adolescents, and eventually into adults, sex and gender differences at many levels develop: genes, chromosomes, gonads, hormones, anatomy, and psyche.

Sex differences range greatly and include physiologically differentiating. Sex-dichotomous differences are developments which are wholly characteristic of one sex only. Examples of sex-dichotomous differences include aspects of the sex-specific genital organs such as ovaries, a uterus or a phallic urethra. In contrast, sex-dimorphic differences are matters of degree (e.g., size of phallus). Some of these (e.g., stature, behaviors) are mainly statistical, with much overlap between male and female populations.

Nevertheless, even the sex-dichotomous differences are not absolute in the human population, and there are individuals who are exceptions (e.g., males with a uterus, or females with an XY karyotype), or who exhibit biological and/or behavioral characteristics of both sexes.

Sex differences may be induced by specific genes, by hormones, by anatomy, or by social learning. Some of the differences are entirely physical (e.g., presence of a uterus) and some differences are just as obviously purely a matter of social learning and custom (e.g., relative hair length). Many differences, though, such as gender identity, appear to be influenced by both biological and social factors ("nature" and "nurture").

The early stages of human differentiation appear to be quite similar to the same biological processes in other mammals and the interaction of genes, hormones and body structures is fairly well understood. In the first weeks of life, a fetus has no anatomic or hormonal sex, and only a karyotype distinguishes male from female. Specific genes induce gonadal differences, which produce hormonal differences, which cause anatomic differences, leading to psychological and behavioral differences, some of which are innate and some induced by the social environment.

Humans, many mammals, insects and other animals have an XY sex-determination system. Humans have forty-six chromosomes, including two sex chromosomes, XX in females and XY in males. It is obvious that the Y chromosome must carry at least one essential gene which determines testicular formation (originally termed TDF). A gene in the sex-determining region of the short arm of the Y, now referred to as SRY, has been found to direct production of a protein, testis determining factor, which binds to DNA, inducing differentiation of cells derived from the genital ridges into testes. In transgenic XX mice (and some human XX males), SRY alone is sufficient to induce male differentiation. 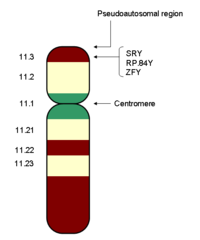 The Human Y Chromosome showing the SRY gene which codes for a protein regulating sexual differentiation.

Various processes are involved in the development of sex differences in humans. Sexual differentiation in humans includes development of different genitalia and the internal genital tracts, breasts, body hair, and plays a role in gender identification.[1]

The development of sexual differences begins with the XY sex-determination system that is present in humans, and complex mechanisms are responsible for the development of the phenotypic differences between male and female humans from an undifferentiated zygote.[2] Atypical sexual development, and ambiguous genitalia, can be a result of genetic and hormonal factors.[3]

The differentiation of other parts of the body than the sex organ creates the secondary sex characteristics. Sexual dimorphism of skeletal structure develops during childhood, and becomes more pronounced at adolescence. Sexual orientation has been demonstrated to correlate with skeletal characters that become dimorphic during early childhood (such as arm length to stature ratio) but not with characters that become dimorphic during puberty—such as shoulder width.[4]

In most animals, differences of exposure of a fetal or infant brain to sex hormones produce significant differences of brain structure and function which correlate with adult reproductive behavior.

This is the case in humans as well; sex hormone levels in male and female fetuses and infants differ, and both androgen receptors and estrogen receptors have been identified in brains. Several sex-specific genes not dependent on sex steroids are expressed differently in male and female human brains. Structural sex differences begin to be recognizable by 2 years of age, and in adult men and women include size and shape of corpus callosum (larger in women) and fasciculae connecting each hemisphere internally (larger in men), certain hypothalamic nuclei, and the gonadotropin feedback response to estradiol.[citation needed]

The absence of the genes that generate male genitalia do not single handedly lead to a female brain. The male brain requires more hormones, such as testosterone, in order to properly differentiate.[5] This hormones are released due to a gene expressed during embryonic development.