Sweet Honey in the Rock

Sweet Honey in the Rock is an all-woman, African-American a cappella ensemble. They are an American Grammy Award–winning (and many times nominated) troupe who express their history as African-American women through song, dance, and sign language.[1] Originally a four-person ensemble, the group have expanded to five-part harmonies, with a sixth member acting as a sign-language interpreter. Although the members have changed over three decades, the group continues to sing and perform worldwide.

Sweet Honey in the Rock was founded in 1973 by Bernice Johnson Reagon, who was teaching a vocal workshop with the Washington, D.C. Black Repertory Company.[1] Reagon retired from the group in 2004. The name of the group was derived from a song, based on Psalm 81:16, which tells of a land so rich that when rocks were cracked open, honey flowed from them. Johnson has said that this first song in which four women blended their voices was so powerful, that there was no question what the name of the group should be. The ensemble's most powerful messages are proclaimed through an enormous catalog of songs addressing the world's woes. They are currently occupied with immigration injustices, congressional greed and lack of compassion for citizens, the environmental imbalance, racial issues and women's issues.

Sweet Honey in the Rock has received several Grammy Award nominations, including one for their children's album, Still the Same Me which received the Silver Award from the National Association of Parenting Publications. They won a Grammy Award for Best Traditional Folk Album for their version of Lead Belly's "Grey Goose" from the compilation album Folkways: A Vision Shared.

Performing at the White House in September 2009

Their vocals appeared in a number of animated counting cartoons on the long-running PBS series Sesame Street.

The group has ventured through 20 vocalists since its creation. Embarking on a new chapter in their musical journey, Sweet Honey In The Rock now includes four core vocalists—Louise Robinson, Carol Maillard (both founding members) Nitanju Bolade Casel, and Aisha Kahlil—plus Shirley Childress (an American Sign Language Interpreter who has been performing live with the group since 1981). Celebrating over 40 years in music and entertainment, Sweet Honey In The Rock releases their 24th album, #LoveInEvolution on January 22, 2016, on SHE-ROCKS 5, Inc./Appleseed Recordings.

Sweet Honey in the Rock has been making music since the mid 1970s. Although the members of the group have changed over time, their music has consistently combined contemporary rhythms and narratives with a musical style rooted in the Gospel music, spirituals and hymns of the African-American Church. The ensemble composes much of their own music. They have addressed topics including motherhood, spirituality, freedom, civil rights, domestic violence, immigration issues, and racism.[2]

Over the decades, more than 20 individuals have lent their voices to Sweet Honey in the Rock. Beginning as a quartet, the group is now composed of six African-American women (including a professional American Sign Language interpreter who accompanies the group on concert tours). 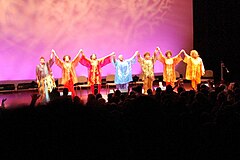 On June 22, 2010, the group released “Are We A Nation?,” their response to Arizona's controversial immigration law, SB-1070.[3] An official music video of the song was released online on July 2, 2010. Directed by James Lester, the video was shot in New York City at Tainted Blue Recording Studio during a live recording session of the song. Amanda Navarro researched and provided the video’s archival images and Russel Soder was the cinematographer. Ramon Hervey II served as the project’s executive producer. The band donated a portion of the proceeds from the sales of "Are We A Nation?" to the Center for Community Change, an organization founded in 1968 to honor the life of Robert F. Kennedy. Sweet Honey In The Rock also joined The SOUND STRIKE boycotting performances within Arizona in protest of the law.[4]

''Sweet Honey in the Rock''

''Feel Something Drawing Me On''

''Still On The Journey''